US Foreign Aid: Confusing, misunderstood, and on the chopping block 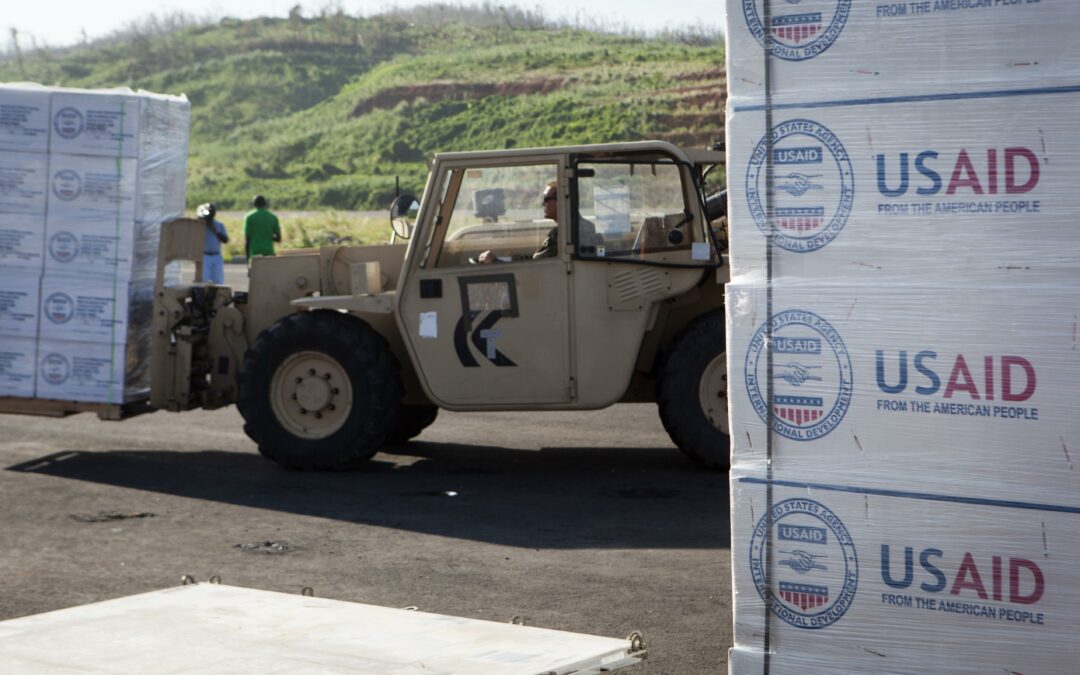 Donald Trump significantly cut the level of foreign aid to the Northern Triangle (Guatemala, Honduras, and El Salvador) in 2019. U.S. foreign aid can be confusing, is often misunderstood, and is on the chopping block. The data presented below will help to better understand its scale and purpose.

Migration from the Northern Triangle is making headlines nearly every day. Hundreds of thousands are forced out of their homes, fleeing violence, insecurity, and a cruel combination of poverty and climate change, and seeking a better life elsewhere. Migration from this region is not new, but it has captured the attention of the United States government in a remarkable way. Donald Trump rose to presidency on a campaign promise to build a wall to stop migrants from entering the United States. Since being in office, he has implemented a host of policies aimed at deterring and deporting migrants. Migration has moved up in priority for U.S. legislators as well, with Congressional Delegations visiting the Northern Triangle and Senators visiting detention centers along the U.S. border.

The U.S. has three broad categories of responses available to deal with what has become a true humanitarian crisis: aggressively deter migrants from entering the United States (the Wall option), deter migrants from entering via diplomatic channels (the Safe Country Agreement option and the Mexico option), or try to address the root causes of the crisis via foreign aid. Without going into the merits of these options, we will examine this last category, with the goals of gaining a better understanding of what U.S. foreign aid is, and how it has been spent in Central America.

We are able to examine U.S. foreign aid thanks to the United States Agency for International Development (USAID) Foreign Assistance Database, which reports comprehensive foreign aid data on more than 20 U.S. government agencies. These data are used to report official U.S. government foreign aid to Congress and the Organisation for Economic Cooperation and Development (OECD).[1] The database is the most comprehensive source of U.S. foreign aid data[2], and allows for a fine-grained analysis of U.S. foreign assistance. More about the data, methodology, details, and frequently asked questions can be found here.

So, what does the data tell us? Before we look at the numbers, let’s take a brief detour to understand what we mean by U.S. foreign aid, and the process by which it gets appropriated and implemented.

WHAT IS FOREIGN AID

Foreign aid in the U.S. government context has a precise, if long-winded, definition:

The foreign aid apparatus of the United States involves almost 30 federal agencies – think Department of State, Department of Defense, and others –  independent organizations, like the Millennium Challenge Corporation and the Inter-America Foundation, that manage and implement funds to support U.S. foreign policy objectives. These agencies’ budgets are determined via a complex budgeting process that begins about 18 months before a particular budget goes into effect. First, departments and agencies create budget proposals, which go to the White House. Next, the President uses (or doesn’t use) the proposals to inform and submit their budget proposal to Congress. The legislative branch is free to ignore this proposal (Congress maintains the power of the purse), and they go through their own process to set overall spending levels, which then goes to Appropriations committees to distribute discretionary spending. Once those are sorted out and agreed to by both chambers, the President signs (or doesn’t) the budget into law, and agencies begin to implement their various programs, projects, and activities. Here is a good overview of the process, and here is a more detailed description of the process as it relates to foreign assistance.

In the case of foreign aid to the Northern Triangle, there is another hurdle; the aid is conditional on these governments meeting certain requirements. As set out in the Consolidated Appropriations Act of 2019, the Secretary of State must certify that these governments meet 16 different requirements – ranging from improving border security and warning their citizens of the dangers of migration, to combating corruption and implementing tax reforms – before 50% of the aid can be disbursed.

As it relates to U.S. foreign assistance, the agencies described above can receive funding from and grant funds to other federal agencies and departments within those agencies. This spaghetti bowl of funders, implementing agencies, and the flows between them can be tricky to untangle and understand. In the example below, we can see that the Department of Health and Human Services, as the implementing agency, has received funds from the Department of State and USAID, and it has implemented some of its own funding. The Congressional Research Service puts it like this: “Federal agencies may implement foreign assistance programs using funds appropriated directly to them or funds transferred to them from another agency. For example, significant funding appropriated through State Department and Department of Agriculture accounts is used for programs implemented by USAID”.[4]

*The following visualizations are best viewed on a full screen. Follow this link to view and interact with the data.

Ignore those numbers for now, they are simply to illustrate how foreign assistance can pass through various agencies and departments before reaching their destination.

So, on to the numbers. Let’s start with a global view, since the Foreign Assistance Database has country-level data going back to 1946.[5]

Several things become apparent: foreign aid has grown (numbers are shown in 2017 constant dollars to be able to compare across years), foreign aid includes both military and economic aid, and the aid is both targeted and responsive – notice the large increase after 2001, and the shift in importance between Europe and the Middle East and North Africa. In fact, the distribution of foreign aid by country follows a fat-tailed distribution, with a few countries getting a large portion of the aid and a large number of countries getting very small relative portions, in relative terms.

Let’s step into Central America, and see how those countries compare to the rest of the world. We’ll be looking at the period between Fiscal Years 2001-2019, because prior to 2001 the data reported to USAID did not contain detailed information on disbursements.[6]

Central American countries have received approximately $10 billion, a little over 1% of all foreign aid in the period examined (interestingly enough, this 1% mirrors private philanthropy to the region). This amount pales in comparison to remittance flows – individuals sending money back home – which stood at nearly $20 billion for the Northern Triangle in 2018 alone. We can see that the Northern Triangle countries receive the lion’s share of foreign aid in the region, although they receive a very small percentage of overall foreign aid (Guatemala received one-third of 1 percent of all foreign aid, and ranked 45 out of the 221 recipient countries). The trend line shows a precipitous drop from FY2017, but it should be noted that the database was last updated in December of 2018, so FY2019 is incomplete.

Furthermore, we can see the type of funding that has been allocated to these countries, things like humanitarian assistance, education, health, and agriculture. Interestingly, governance is a major category for Central America. These categories are further broken down by subcategory, which can be revealed when hovering over one of the points.[7] We can also see how that has changed over time by looking at the chart in the bottom left. Again, hovering over this chart will reveal detailed data for that year, and further break it down by what is called the ‘purpose’. For example, hovering your mouse over the line for Governance in 2017 shows that the U.S. disbursed $3.24 million for “Anti-corruption organisations and institutions”, which falls under the Government and Civil Society subcategory of the Governance foreign aid category. All of this gives us a good sense of the when, where, and what; now for the who.

This next dashboard shows the largest contributors to Central America by funding agency – hovering over an agency shows the implementing agency, and subagency, the specific office or department within an agency that obligates and disburses the foreign assistance, often through an implementing partner.

USAID is the largest contributor to Central America, spending about $4.3 Billion, or 2%  of their total budget between FY2001 and FY2019. By contrast, the Inter-American Foundation spent only $86 million, but 20% of their budget on the region. Using the slider below to adjust the time period, we can see that from FY2014 to FY2019, USAID’s portion of funding going to Central America was at 3%, while the Inter-American Foundation’s jumped to 25%.

The Foreign Assistance Database categorizes each implementing organization – the organizations that received funding to run projects or programs – in accordance with the OECD’s Development Assistance Committee (DAC) methodology, which includes categories like enterprises, NGOs, governments, and church and faith based organizations. In Central America, governments, NGOs, and enterprises make up the bulk of the recipients of funding. At the bottom of the dashboard is a list of individual implementing organizations, and hovering over each one will show which countries that organization has a presence in. Use the category breakdown above to filter the implementing organizations. For example, filtering on Universities and Research Institutes reveals that RTI International and the University System of Maryland have received considerable funding, the majority of which has been spent in Guatemala. Looking closer, the focus of RTI International’s programs have switched to El Salvador, as evidenced by the orange line in the image below. This view allows us to dispel a common myth, that most foreign aid goes directly to foreign governments, in some cases propping up corrupt regimes. We can see that a small percentage of funding does indeed go directly to foreign governments – the government of Honduras has received just over 1% of all funding for Central America. However, the majority of aid is channeled through enterprises like Development Alternatives, Inc. and Creative Associates International, and through NGOs like Save the Children, and church and faith based organizations like Catholic Relief Services.

As we have seen, this database allows us to drill into individual implementing organizations. We can take this further and see a list of their projects, broken down by category. On this next dashboard, for example, if we are interested in the projects Counterpart International is carrying out in Guatemala related to governance, we can filter our way down to that level – first by clicking on Counterpart International, then on Governance on the chart below that, and finally on Guatemala on the chart at the bottom of the page – to see the list of projects on the right hand side of the dashboard. As mentioned earlier, this collection of dashboards is meant to be exploratory – use the filters and hovering functions to try to answer your own questions, and see what you can discover. With over 48 million data points, we have just begun to scratch the surface, although some key takeaways are already apparent. (1) The amount of U.S. foreign assistance is not monumental, especially when stacked up against the challenges these countries are facing; (2) corrupt governments in Central America are not reliant on U.S. foreign aid for operating capital; (3) U.S. foreign assistance – important for supporting system-shifting initiatives like anti-corruption and good governance work – is shrinking. Play around with the data and see what you can find out.

[5] USAID’s Foreign Aid Explorer is a great tool to explore this data. For our purposes, we needed to download the data to have more flexible analyses.

[6] More detail on this cutoff can be found here. We use disbursements, as opposed to obligations, because it shows money that was actually spent, not just promised. This is a typical way to analyze data of this type.

[7] A note to the user – these dashboards are meant to be exploratory. Click around, using filters, and otherwise exploring the data are encouraged. If you have questions of how to do so, please contact jwachter@nullseaif.org.