Together, SIF and Sounders designed a philanthropic project that would have a lasting impact in Seattle as well as in Mexico City, the site of the Sounders CONCACAF matchup vs. Mexican team Club América. 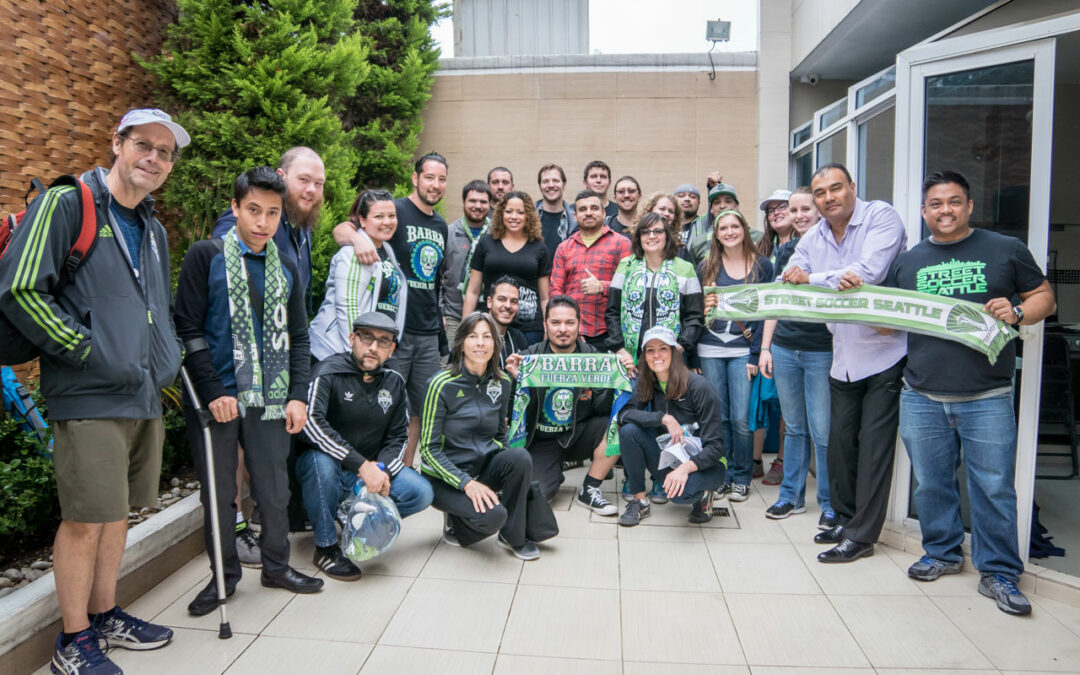 Teamwork divides the task and multiplies the success. This rings true not only in sports, but also when working towards a healthy community: When trying to solve large problems facing a community, chances of success are greater when community members work together.

Together, SIF and Sounders designed a philanthropic project that would have a lasting impact in Seattle as well as in Mexico City, the site of the Sounders CONCACAF matchup vs. Mexican team Club América. The project aimed to raise funds and awareness in support of Street Soccer Seattle (SSS) and Street Soccer Mexico’s (SSM) collective mission to leverage the game of soccer to empower homeless youth.

Through a giving campaign, 143 individual Sounders FC fans raised nearly $9,000 for the two Street Soccer organizations. Each fan who donated to the project entered for a chance to win a trip to Mexico City to visit with Street Soccer Mexico youth and staff and watch the Sounders away game.

While in Mexico City, the group accompanied SSM staff on a visit to a community of 20 homeless youth living on a busy Mexico City highway exit ramp. The funds raised for SSM were designated to implement an intervention with this specific community, a community that SSM has spent years building trust. The group saw firsthand the harsh reality these youth face, and how SSM would make a difference.

After this visit, the group was joined by 25 Emerald City Supporters, dedicated Sounders FC fans who traveled from Seattle to watch the game and participate in the community engagement activity. Together the group attended a SSM practice and interacted with over 50 disadvantaged youth through soccer drills, games, and life skills activities. After practice the SSM youth and Seattle visitors all headed to the Aztec Stadium to watch the Sounders FC match versus Club América.

The Brasinos were moved by what they experienced on their trip to Mexico, and decided to support further by making a significant contribution. Terry and John said of their trip and their decision to give, “We watched the coaches and staff of Street Soccer Mexico (SSM) facilitate a moving transformation in the lives of several homeless youth who live under blankets wedged between two on-ramps, many addicted to drugs, with babies of their own, and who clearly struggle each day with self-esteem… we met three of the players that used to live here, had taken the next steps, with continued help from SSM, and now held jobs and lived in apartments. It was an easy decision for us to contribute a bit of our good fortune to organizations like Street Soccer Mexico and Street Soccer Seattle who have found a way to do so much for good for humanity through the beautiful game of soccer.”

In soccer and in building healthy communities, you don’t win with the best talent – you win with the players who are able to play best together. Youth homelessness will not be solved overnight, nor will it be solved with a siloed approach. Through positive partnerships like that of SIF and Sounders FC, small successes will be multiplied to improve the lives of homeless youth, wherever in the world they may be.

Seattle International Foundation (SIF) supports worldwide poverty alleviation efforts through grant-making and other activities, with a strategic focus on Central America. SIF was founded in 2008 as a supporting organization to Seattle Foundation for the purpose of increasing and enhancing international philanthropy from the Pacific Northwest and to serve as a resource to the community. Since 2008, SIF has granted more than $17 million to 188 high impact organizations in 68 countries, including $10 million in grants to Central America.