This month, I spent a week at the Mexico-Guatemala border with colleagues from WOLA – a SIF grantee since 2012. We wanted to talk with migrants, humanitarian workers and officials about the current conditions for those migrating to the United States. 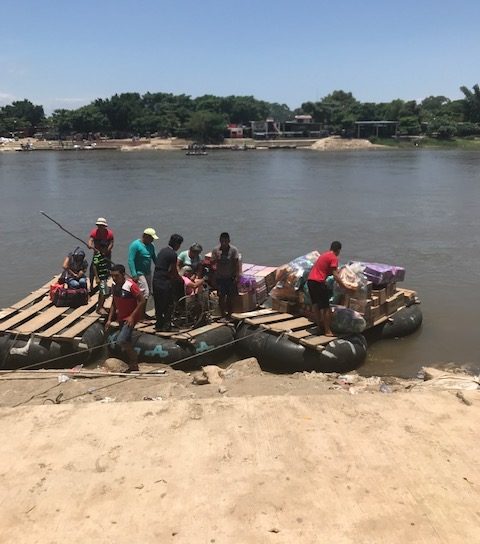 Five young women sat up against the cool wall of the Siglo XXI detention facility in Tapachula, Mexico seeking relief from the scorching morning heat.  Their eyes and faces where understandably weary as I approached.  I am sure they wondered if I was from the U.S. government, or even the hated migra (Border Patrol).

“Buenos dias,” I said in my very best Spanish. They responded nervously. “De donde son?” I asked hoping to make a connection.  Four of the five said they were from Honduras and the fifth from El Salvador.  “My wife and I lived in Honduras for two years,” I said.  They looked surprised, and then tested me.  As I answered their questions down to the neighborhood, street, and corner, they seemed to relax a bit more.  I then asked them about their neighborhoods.  Not surprisingly they were from towns and “marginal” communities notorious for gangs and violence.

All five women told me that they had been held in the detention facility for several weeks and that conditions where miserable.  One woman said she cried for two days when she was separated from her daughter.  They complained of overcrowding, filth, bad food, and poor healthcare for children and adults. One young woman – maybe in her mid 20s – told me she became suspicious she was pregnant while she was in detention.  She was already the mother of two.

She asked to see the health worker and a pregnancy test was administered that confirmed the pregnancy.  The health worker then gave her a pill.  She did not know what it was, but believes it made her violently ill.  She lost the baby within a day.  A second woman from El Salvador had a similar experience although she did not lose the fetus. She said she took the pill and became very ill swelling up and turning black and blue on her body. She complained and they released her. She walked down the street to another health center – not connected to the detention facility – where they cared for her until she was better.

There was no way to verify these stories, because we were not given access to the detention facility (although I’ve entered in the past), and we have no way of knowing what pill was administered.  But the women were clearly traumatized.

This was just one part of their stories. They left their homes due to a combination of extreme violence and economic despair.  One woman said she was fleeing a man who had beaten her.  She begged a UNHCR representative walking past us to help her transfer her case elsewhere because she had recently seen her attacker in Tapachula.  She believed he was still looking for her.  Another said that she fled when gangs, in her community outside of San Pedro Sula, Honduras, killed her partner.  She expressed deep concern for the young women she left behind who was also being threatened by the gangs.

The surge of Central American migrants that was setting records in April, May, and June of this year seems to be slowing.  July saw a small decrease.  Some say this is the result of more aggressive Mexican enforcement efforts by at its Southern border.  We witnessed some of this as we walked along the lower Suchiate River dividing Mexico and Guatemala.  Mexico has thrown together a new security force, known as the National Guard (GN) and tasked them with more vigorous border control akin to U.S. practices along its border with Mexico.

A walk along the Suchiate river (where migrants and contraband had flowed freely just a few years back) showed much reduced traffic.  Armed National Guard soldiers stood every 100 yards along the riverbank, in the shade of a tree, staring across the river to the Guatemalan side. Rafts are still crossing with contraband and people but they are much fewer and are being met by Mexican immigration officials who check their credentials when they disembarked.

Conclusions:  Central American migrants continue to arrive at the Mexico-Guatemala border at a significant rate, albeit in slightly reduced numbers. The United States and Mexican governments are adopting increasingly punitive policies that result in increased detention. In some cases, detention occurs in what migrants and activists describe as “inhumane” conditions.  The hardships and trauma they endure along the way, builds upon the trauma and despair that led them to flee their homes.  Violence from multiples sources – interpersonal, gangs, and the state – is among the most frequent rational given by migrants, especially those arriving from Honduras, for their decision to flee.  To protect the rights of the vulnerable and desperate, governments from Central America, Mexico, and the United States need to reconsider current policy and address the drivers of migration to reduce the vulnerability of those seeking protection.

Director of the CA in DC Initiative